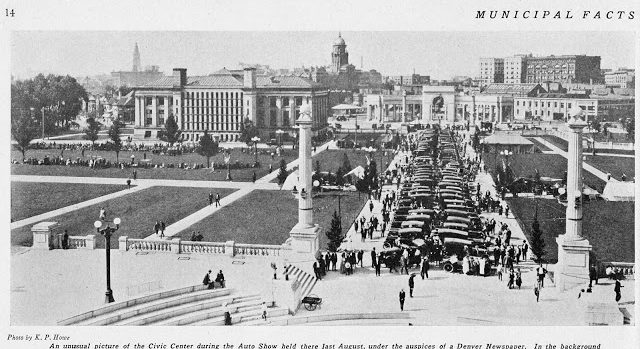 Thought we’d share a little history about Denver’s Golden Triangle Neighborhood – home to our original downtown Denver auto repair shop, Golden Triangle Auto Care. At the turn of the century, one Denver mayor stood out as a driving force in changing the face of the City. Robert W. Speer served his first two terms as Denver’s 26th mayor from 1904 to 1912. He then served as the 30th elected mayor beginning in 1916 but died from influenza halfway through his third term in 1918.

As Denver mayor, Speer arguably had the most profound impact on the city, much of which can still be seen today. After visiting the 1893 World’s Fair in Chicago and seeing the implementation of the City Beautiful movement, Speer fully embraced the ideology. He visited Europe several times for inspiration, and would ultimately bring his City Beautiful vision to Denver.

At the turn of the century the City Beautiful movement was a response to the poor living conditions in the country’s large cities. The urban areas were becoming crowded with the transition of rural populations into the cities, the influx of immigrants to the country and high birth rates. The movement proposed better living conditions through beautification of the urban areas, mainly by way of grand architecture and park systems. The movement lasted for several decades and greatly influenced urban planning.

At the beginning of his first term as mayor, Speer set in motion his Denver City Beautiful agenda. His accomplishments in his first term were Civic Center Park and the Denver Municipal Auditorium. The auditorium presented free concerts every Sunday and was host to the 1908 Democratic national convention. Over time other architectural masterpieces would come from Speer’s influence such as the City & County Building, Denver Library and Museum of Natural History.

Beautification being a central part of the movement, one of Mayor Speer’s first missions was to take on the unruly Cherry Creek. Lined with shanties and industrial ruins, the waterway would regularly cause flooding in Denver. Building concrete walls to contain the creek, the new construction established bridges, walkways and a road. The creek was lined with trees, and the diagonal path through Denver created multiple triangular shaped parks, called Speer Boulevard Triangles. This would be one of Speer’s greatest accomplishments and the road running alongside Cherry Creek would be named after him, Speer Boulevard.

Speer Boulevard is the southwestern side of the area known as the Golden Triangle. Creating the triangle from Colfax to Broadway, the area encompasses Civic Center Park and was a large part of Speer’s vision. Keeping with the City Beautiful movement, the area remains a cultural center, highlighted by the Denver Art Museum. As one of Denver’s oldest neighborhoods with turn of the century Victorian style homes, Speer’s Golden Triangle is a legacy to his vision over 120 years ago.