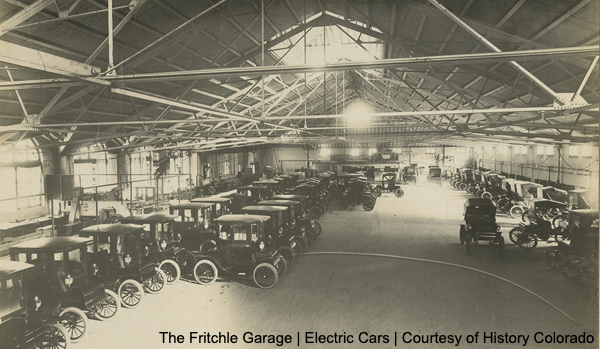 The first manufactured automobile in Denver made its debut in 1899 at a bicycle show at Colosseum Hall. Colorado residents were eager to see Electric Vehicle Company’s Horseless Wonder. Three different models of the new automobile were exhibited by Mr. A. H. Gilbert, who demonstrated the vehicles on Denver streets during the show. The electric powered vehicles could travel up to 35 miles at speeds ranging from two to twelve miles per hour.

Early automobiles were built by hand in Denver homes and bicycle shops. Plans for the various models were often acquired through magazines and manufacturers on the East coast. The first recorded automobile manufactured in Denver was the Temple, built by Robert Temple, owner of the Temple Machine Company. E. J. Cabler provided plans and commissioned Temple to build the vehicle in 1899. At a cost of $2,000 the Temple took four months to build.

Upon completion, Temple, Cabler and his wife announced a trip from Denver to Colorado Springs to demonstrate the capabilities of the new automobile. Leaving Friday morning, July 21, 1899, it took three days to make the trip. Traveling along the service road of the Rio Grande railroad tracks, they made their way towards the Springs. South of Palmer Divide, they ran out of gas on Saturday and waited for fuel to be delivered before they could continue the journey. The travelers finally arrived in Colorado Springs on Sunday afternoon.

Returning to Denver, Robert Temple offered to build anyone their own Temple automobile for two thousand dollars, but had no takers.

Manufacturing in Denver would never really take hold. The most successful manufacturer in Denver was Oliver Fritchle with his Fritchle Electric. Fritchle’s battery powered car could travel 100 miles on a single charge and made a well documented 1,800 mile trip from Lincoln, Nebraska to New York City, suffering only a single flat tire during the trip.

While the small automobile manufacturers would flounder in Denver, local residents adopted the new mode of transportation early on. Instead of automobiles being built locally, they would be shipped in from the East. Demand was constant, with the limited inventory struggling to meet demand.

With the development of the assembly line, Henry Ford would forever change the way cars would be manufactured, creating a greater supply at a lower cost. In 1909 Ford’s Model T sold for $950. As the assembly line became more efficient, the price would drop steadily over the years to the lowest price of $260 in 1925. With an ample supply and a low cost, the automobile was attainable to a larger portion of the population.

Instead of shipping Model T’s across the country to meet demand, in the early 1900’s Ford put manufacturing plants in cities across the country. In 1914 a Ford production plant was built at 920 South Broadway Boulevard in Denver. The local plant would produce Ford’s Model T until 1933.

After shutting down production, the building would exchange hands, eventually being acquired by Gates Rubber Company. Gates would ultimately build its empire here, producing belts and hoses for all types of vehicles around the globe.

After Gates Rubber shut the Denver facility down in the 1990’s, the building sat vacant until it was taken over by Hosting.com, a global internet hosting company. The original building of the Denver Model T manufacturing plant is easily seen today with Hosting.Com signage along I-25 at Broadway.

Interested in learning more about Denver’s automotive history? Check out the University of Colorado Master of Arts Thesis by Steven Llewellyn Beaghler accepted December 1, 1989 titled The Automobile in Denver 1895-1910.